For the longest time, davidmlawrence.com was merely a mirror for fuzzo.com as well as a repository for content that would not fit on fuzzo.com's host.

Recently, I consolidated my Web hosting plans, which resulted in more flexibility and—even better—more space. With the new setup, I began to consider giving each domain a different look in addition to the different names.

A new look for davidmlawrence.com was readily available, too. In 2010, shortly after I enrolled in the Ph.D. program in Media, Art, & Text (MATX) at Virginia Commonwealth University. One of the requirements of the program at the time was the development of an electronic portfolio in which some thought was devoted to the design as well as the function.

Given that I was not one of the more "artistic" members of my cohort of MATX students, I could have either stuck with my current (at the time) fuzzo.com design, switched to a blog-based platform, or just half-assed the whole thing.

Instead, I decided to try something creative, and this is the result.

You can read more about the design below. It is important to note, however, that much of this site was presented as my electronic portfolio for the MATX program: term papers, presentations, computer exercises, personal experiments—everything I submitted in that portfolio is here, though the editorial commentaries on the work (such as in the design statement below) may have been changed.

In the end, I decided to give the home page of both sites the same look and feel using this design—named Orkney for reasons explained below.

In case you're curious about what I had before, check out my "milkweed bug" design here.

I am a bit difficult to describe. I am a journalist, author of two books (Upheaval from the Abyss: Ocean Floor Mapping and the Earth Science Revolution, published by Rutgers University Press in 2002; and Huntington's Disease, published by Chelsea House in 2009), scientist and professional scuba diver. My education is diverse, ranging from biology, ecology, and geography to journalism. I have taught biology, geography, meteorology, and oceanography at several colleges in the Richmond, Va., area; now I am a Ph.D. Candidate in Media, Art, and Text—and occasionally teach journalism—at Virginia Commonwealth University.

I am also sports editor for two newspapers in the Richmond Suburban Newspapers group—The Mechanicsville Local and The King William Local.

My journalistic specialties are a rather odd combination of science and sports writing. In addition to my book, my writing has appeared in two anthologies The Science of Dune: An Unauthorized Exploration into the Real Science Behind Frank Herbert’s Fictional Universe and The Science of Michael Crichton: An Unauthorized Exploration into the Real Science behind the Fictional Worlds of Michael Crichton (both published by BenBella Books in 2008), and the magazines Geotimes (now Earth), The Lancet, The Lancet Infectious Diseases, Mercator's World (sadly, no longer with us), and Vegetarian Times.

Having grown up in and with the newspaper business, I have spent much of the past three decades working for newspapers such as The (Charlottesville, Va.) Daily Progress, The (Newport News, Va.) Daily Press, the Miami Herald, the (Parsippany, N.J.) Daily Record, the (Petersburg, Va.) Progress-Index, the Philadelphia Inquirer, the Richmond (Va.) Times-Dispatch, The (Shreveport, La.) Times, The Tallahassee (Fla.) Democrat, and the (Norfolk, Va.) Virginian-Pilot. Most of that has been sports, but I have done my share of work on the news and online side.

Some of my more challenging writing work has been for the radio programs Our Ocean World and MicrobeWorld.

In 2010, I accepted the most challenging writing assignment of my life—working as science writer/editor/photographer for the Sea Education Association's Plastics at SEA: North Atlantic Expedition 2010. We spent more than 30 days at sea, sailed more than 3,000 nautical miles: east from Bermuda, across the Mid-Atlantic Ridge, and back. During the expedition, I wrote and published more than 33,000 words and took more than 5,000 photos.

As a scientist, my interests began primarily in biogeography and forest ecology, with an emphasis on using tree-ring analysis to tackle questions regarding the distribution and environmental history of tree species. I have since added freshwater and marine ecology to my interests. Over the years I have worked as a consultant to the Environmental Protection Agency and the USDA Forest Service, as a staff member of Virginia Department of Environmental Quality; and most recently, as an ecological consultant at Lake Rawlings Scuba Park in Brunswick County, Va.. My academic writing has appeared in the Bulletin of the Ecological Society of America, the Canadian Journal of Forest Research, Tree-Ring Research, and the Virginia Journal of Science.

Personally, I'm more than a bit of a flake. My private interests are as diverse as my professional ones, including music (pretty much anything but elevator music), writing (of course, just don't ask me how far I've come with my screenplays or novel), photography, fishing (I've finally learned to fly fish), hiking, genealogy, and more other things than any sensible person could cram into one lifetime.

A theory of design 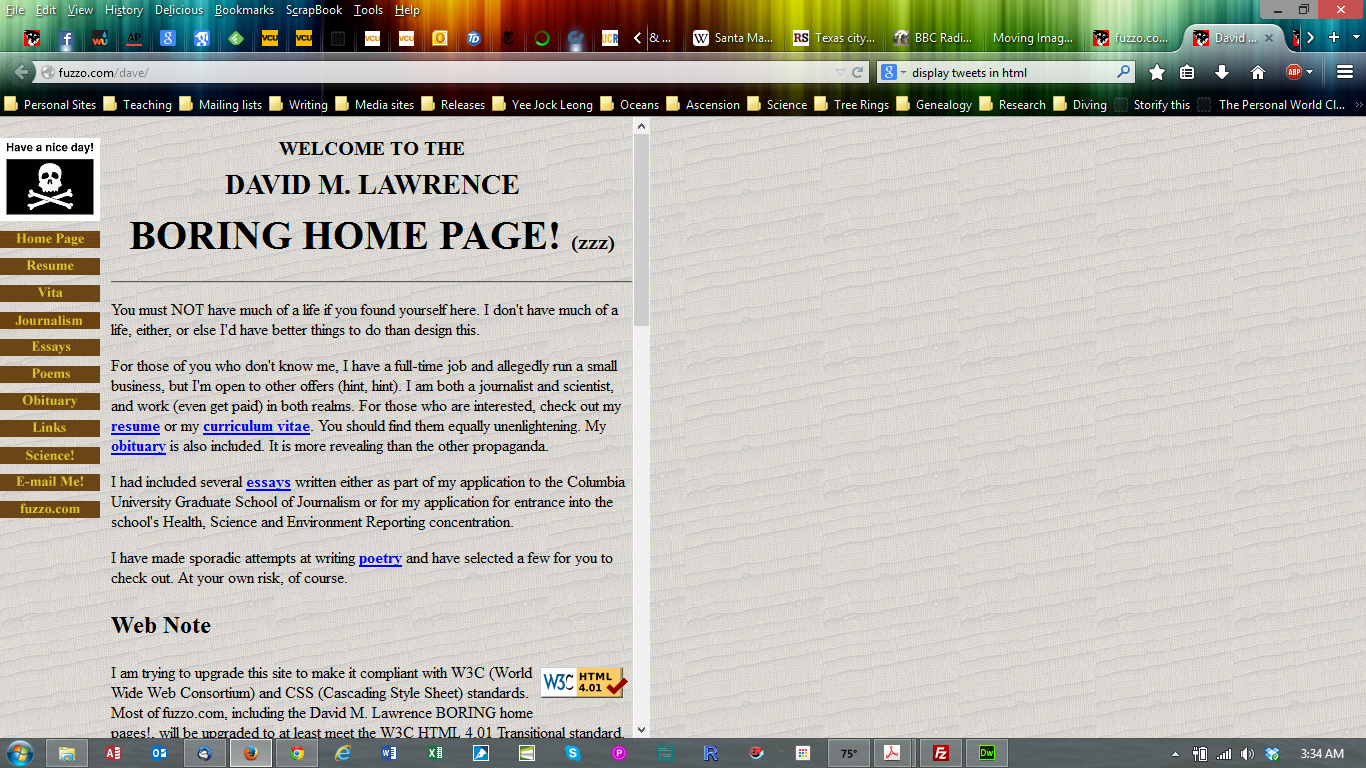 DavidMLawrence.com was originally intended to be a component of my original Web site, fuzzo.com. That site went through a number of iterations in design. Initially it was a purely personal site whose design was influenced by my work as a dendrochronologist (tree-ring scientist). The background was derived from an image of tree rings. The colors in the buttons call to mind colors that can be seen in wood, bark, and foliage. And the "Have a nice day!" logo did—still does—reflect something of my personality. 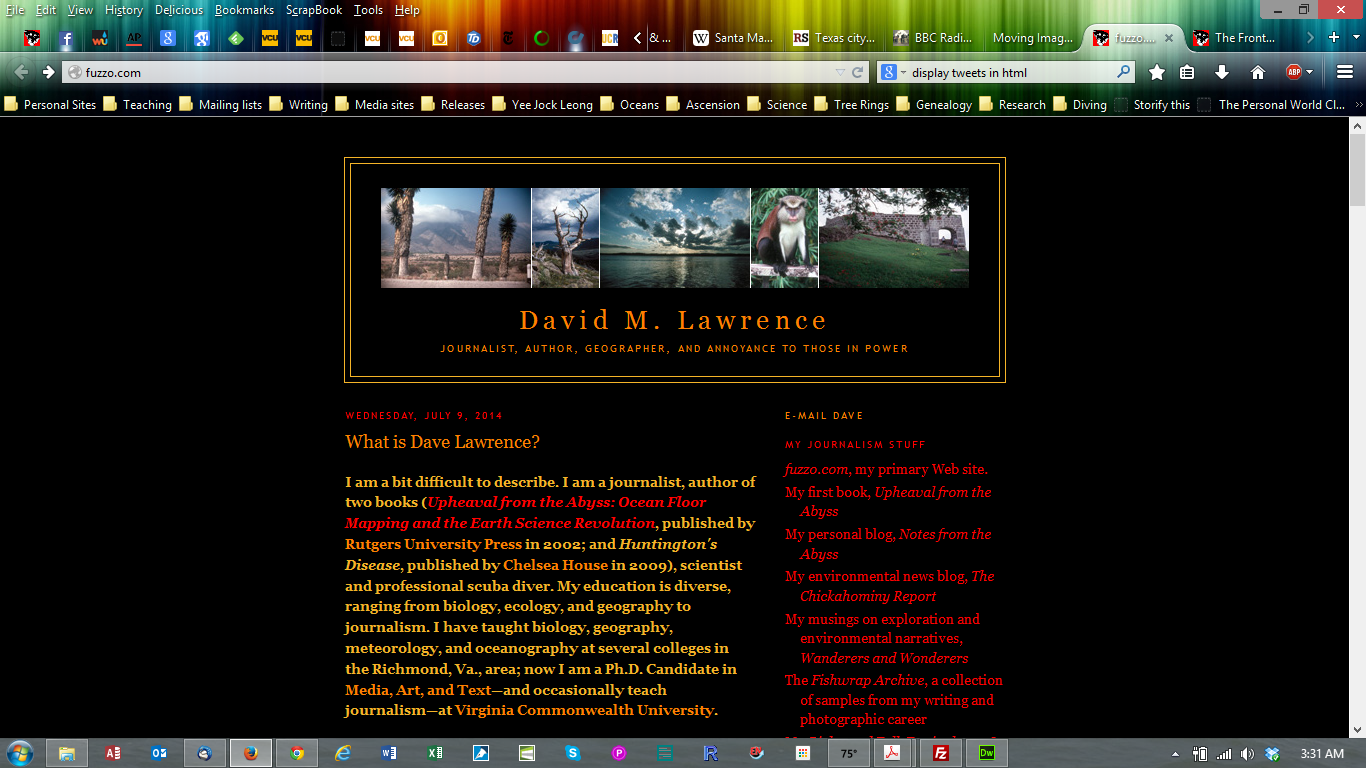 I stuck with the tree-ring design for quite some time. Eventually, however, I longed for a different look and—inspired by my early forays into Blogger—adopted a blog-style interface with a banner and a right-side navigation bar much like you see here. I also had a desire to present photographs in a manner that allowed them to stand out from their surroundings. That led to the development of my "milkweed bug" color scheme (oranges, yellows and reds on a black background) that I still use on fuzzo.com.

In August 2010 I enrolled in the Ph.D. program in Media, Art, & Text at Virginia Commonwealth University. One of the requirements for the program at the time was the development of an electronic portfolio in which we were to demonstrate a basic competence in multimedia techniques, such as writing, Web presentation, audio and video production, and animation.

Hence what you see here.

I designed this site using two basic criteria: function and professionalism (with a little humor). The overall format is typical of a blog, with a header, content pane, navigation pane, and footer. It is a typical format used by many journalists such as myself. In my case, I moved the navigation pane to the right side of the page, in keeping with newsroom discussions—in my professional Web design days—that many "readers" preferred right-hand navigation. (When I began my Web career, most of us put the navigation controls on the left.) I have added local navigation controls to the header section, using cascading style sheets (CSS) to control positioning of the link references.

The look and feel was taken from a photograph I took on the island of Mainland, in Orkney, Scotland. It is of a portion of the Ring of Brodgar. In addition to being a journalist, I am a physical geographer by training, and draw a significant amount of inspiration from natural landscapes. This landscape, in particular, is stark, beautiful, and haunting—haunted by the "ghosts" of those who erected the stones that make up the ring nearly 5,000 years ago, as well as by those who have lived there since. 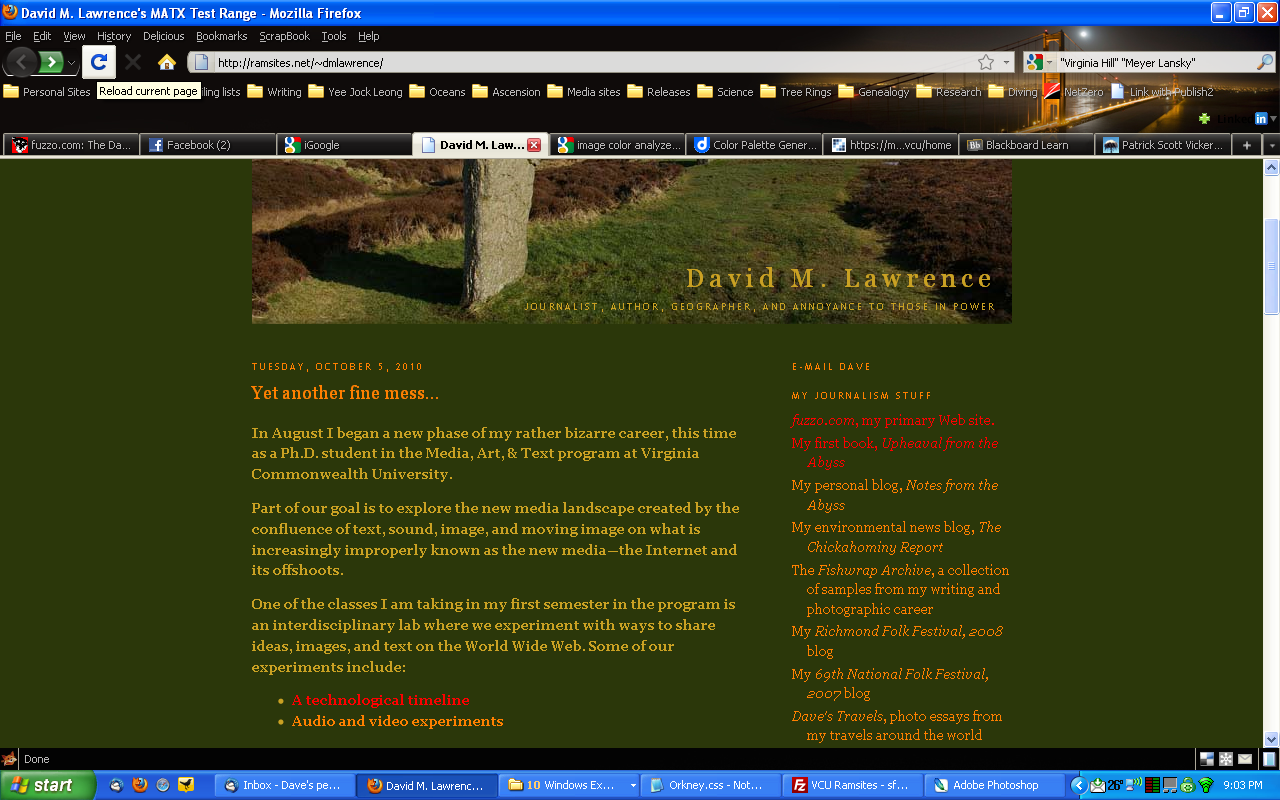 I began this experiment when designing a template for my site on the social network Bebo. Using an earlier version of the photo, I used reds and browns from the image for backgrounds, and the mustard colors on the stones for text. In my initial design for this site, I used the same scheme, but some commented that there was insufficient contrast between the color of the type and the background. 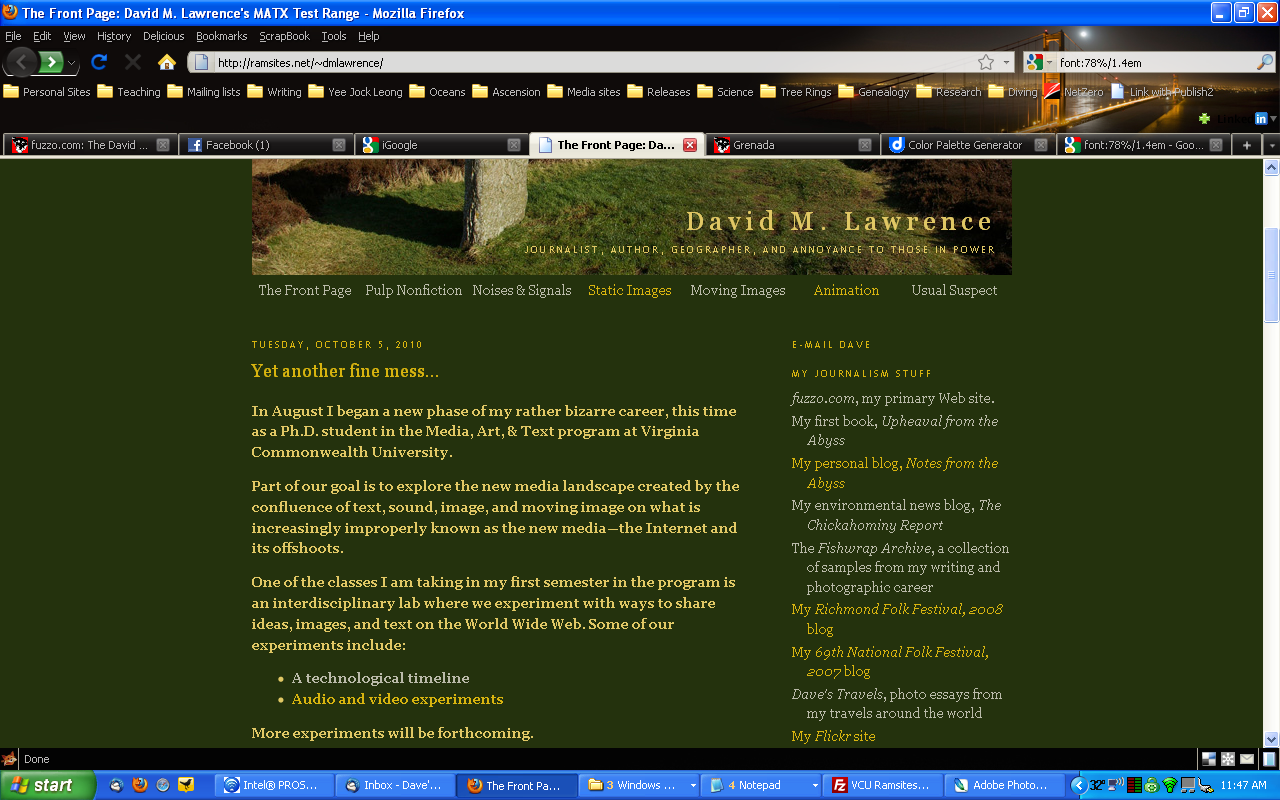 Recently, I reworked the original photo—using better color correction than I had previously. I tested several color combinations from the reworked photo to produce what you now see. I think the contrast is much better in this case. In addition, the link-related colors are also drawn from the photo—they were not in the original scheme. I realize that some people prefer dark type on a light background, but for me I prefer light type on a dark background. Light type on a dark field also creates more of gallery feel to me.

For the sections of the site, I have divided it into The Front Page, Pulp Nonfiction, Noises & Signals, Static Images, Moving Images, Flashimation, and the Usual Suspect. The titles combine elements of description with my sense of humor.

In the footer you will note my promotion of adherence to HTML and CSS standards. I will periodically test my pages to ensure compliance with World Wide Web Consortium (W3C) guidelines.

Yet another fine mess...

In August I began a new phase of my rather bizarre career, this time as a Ph.D. student in the Media, Art, & Text program at Virginia Commonwealth University.

Part of our goal is to explore the new media landscape created by the confluence of text, sound, image, and moving image on what is increasingly improperly known as the new media—the Internet and its offshoots.

One of the classes I am taking in my first semester in the program is an interdisciplinary lab where we experiment with ways to share ideas, images, and text on the World Wide Web. Some of our experiments include:

More experiments will be forthcoming.

Check out my LibraryThing catalog