I was never very happy with the thermometer experiment, but figuring out how to generate graphics on the fly with any program is a pain. Instead, while browsing journalistic applications of Flash, I found something more relevant—and something I was interested in deploying as more than a demonstration of competence. 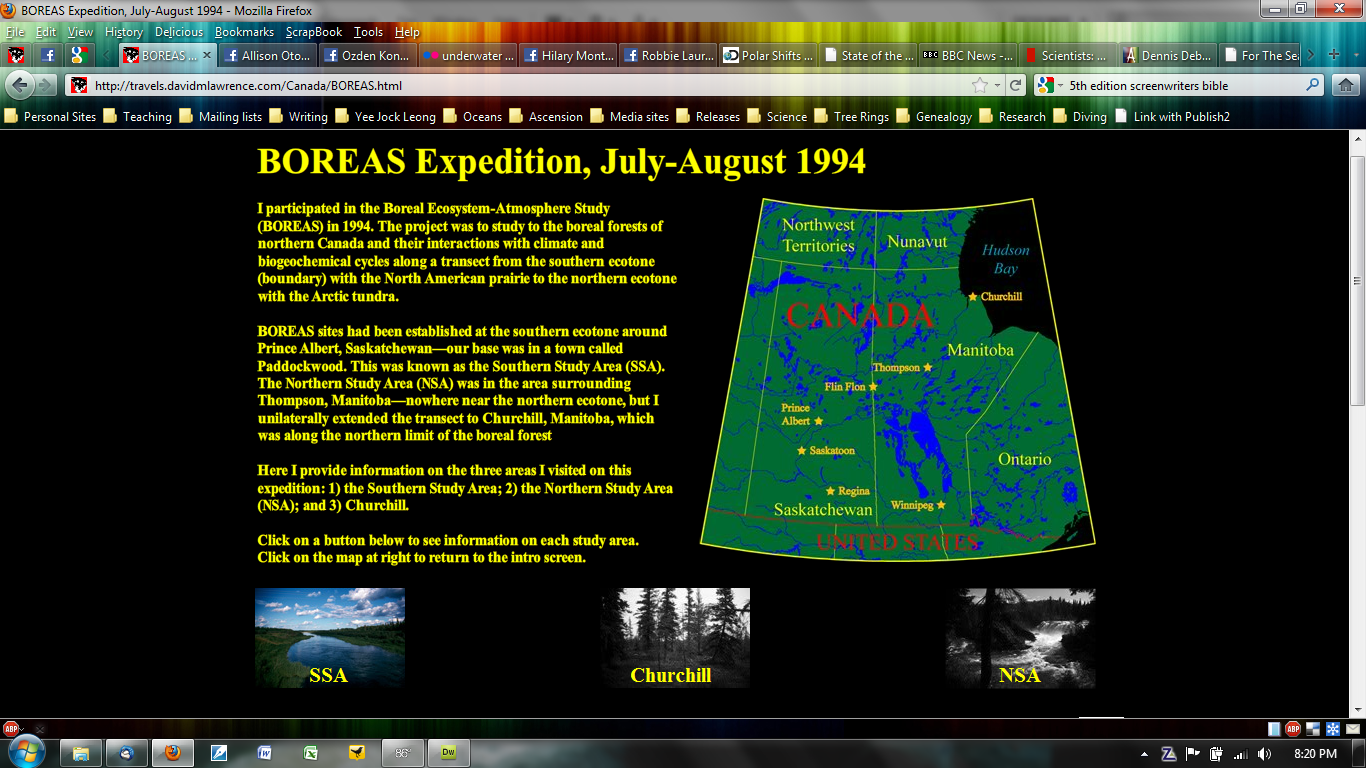 This Flash project consists of maps, descriptions, and links to photo essays and (Flash-enabled) slide shows of images from an expedition I joined in 1994—the Boreal Ecosystem-Atmosphere Study (BOREAS).

I spent more than a month collecting tree-ring samples from BOREAS and non-BOREAS sites in northern Manitoba and Saskatchewan. Most of the work was around the project's Southern Study Area (SSA) in the vicinity of Prince Albert National Park in Saskatchewan and the Northern Study Area (NSA) near Thompson, Manitoba. I also took a side trip to Churchill, Manitoba—the town on the shore of Hudson Bay that calls itself "the polar bear capital of the world"—to obtain tree-ring samples from forest stands adjacent to the Arctic tundra.

The main Flash application consists of a text field, a map, and four buttons that, when clicked, change the text in the text field.

Three of the buttons are images from each of the areas I visited (SSA, NSA, and Churchill) that call up a small narrative about each button's respective site. The fourth button—a map (that I created) of Saskatchewan and Manitoba—that resets the text field to the introductory narrative.

Below the main Flash application are links to the original, Javascript-based slide shows, complete with cutlines (captions) for each slide. In addition, there are links to Flash-enabled slide shows. These lack cutlines, but the slides can be set to advance automatically.

One of the things we needed to learn to do is to use Flash to create some kind of animated content. I created a thermometer animation in the hopes that I could use it with another program—a temperature estimation program that I wrote long ago. The plan is to pass temperature variable to Flash and have it plot the temperature on a graphical thermometer.

The plan is pretty complicated, and Flash may not be the best option for what I want to do. So, for the purposes of the class, I have posted my original thermometer animation—which, to my surprise, runs automatically.