Back in March 2012, I took part in the American University Center for Environmental Filmmaking's Classroom in the Wild: Chesapeake Bay. Over the course of a week, we immersed ourselves in a crash course in documentary film. We learned the basics of getting good footage, researched potential topics, and went to Blackwater National Wildlife Refuge on Maryland's Eastern Shore. Over course of two-and-a-half days four groups of students shot all the footage we could get, then we went back to American to make short films out of the vast amount of digital footage we shot.

The group I was in decided to focus on refuge's effort to save the endangered Delmarva fox squirrel, a subspecies found only on the Delmarva Peninsula today. I finished a first draft of this film that week -- with American University police officers wanting to kick me out of the video lab late my final night there. (Understandably, no official AU folks were around.)

I finally managed to revised the film in preparation for a Classroom in the Wild film showcase on Nov. 6, 2012 (election night), and tweaked it a bit more the day after:

The first underwater documentary film (below) was prepared as part of an independent study. This second underwater documentary film was produced to meet a second competency requirement for my dissertation program in Media, Art, & Text at Virginia Commonwealth University. My committee asked me to produce a short film that tells a story, and that the story should include humans as well as aquatic critters.

The footage was shot in the spring of 2012 during the independent study, which was designed for me to get more familiar with underwater videography and photography. The story on which the movie script is based was written for David Wojahn's ENGL 672 creative nonfiction class the spring of 2012. (Actually, I wrote the story to serve as a basis for a subsequent script.)  The main differences in the script are the introduction of the the human element and removal of now-redundant visual description.

I reused some footage from the video I produced for the independent study.

Unfortunately, what you see is what I got.  My SeaLife DC1200 camera shoots 14 megapixel still photos, but still only records 640x480 pixel videos.  The voiceover was recorded on a Zoom H4n digital audio recorder in my office and edited in Audacity.

As with the independent study film, I originally produced in in Lightworks. Unlike last year, it took a hell of a lot more work to export the video to a useful form this time.  It took a two-stage process: 1) export the film in AVCHD format (with H.264 compression) from Lightworks; and 2) transcode the AVCHD file into MJPEG format using WinFF. For some reason the audio and video got out of sync in the sequence where Jim McNeal is giving a pre-dive briefing for students.  I'm not sure why that happened -- the audio and video are in sync in the Lightworks timeline.  Maybe it has something to do with the original footage being 30 frames per second and the exported footage being 29.97 fps.

Eventually, I recut the film in Premiere Pro and export it without any of the problems encountered in the original Lightworks cut.

Here is the final video:

In the spring of 2012 I took an independent study with Dr. Tim Bajkiewicz to practice underwater videography. Over the course of two weekends in April, I shot photos and video during and after open-water scuba classes at Lake Rawlings Scuba Park in Rawlings, Va. I used a SeaLife DC1200 camera.

My initial challenge was learning how to properly white balance the camera in both modes. The first weekend I tried using artificial lighting in video mode, but in most cases, the SeaLife video light was inadequate. There was too much ambient light for it to make much of a difference.

I also tried using the SeaLife's built-in underwater filters which compensate for the loss of specific colors (first reds, then oranges, then yellows, etc.) with depth. As you can see in the video below, the filters did not perform as well as I would like.

Given the quality of the raw footage, I had to find a video program that had the ability to implement color correction. While I have access to Adobe Premiere Pro at VCU, I searched for an open-source video editor I could use on my personal computer. I found Lightworks, a powerful but frustrating non-linear video editor.

While I have issues with Lightworks, the fact remains that the version I am using is free, so I cannot complain much. My first challenge was importing the raw AVI footage from the DC1200 into Quicktime format. (Lightworks has a bug in which it can play—and edit—only about 12 seconds of an imported AVI file.)

To make the conversion, I used WinFF. When using WinFF—a GUI for the command-line program FFmpeg—one must set the FFmpeg option to "-vcodec mjpeg" as you see when you expand the following screen shot: 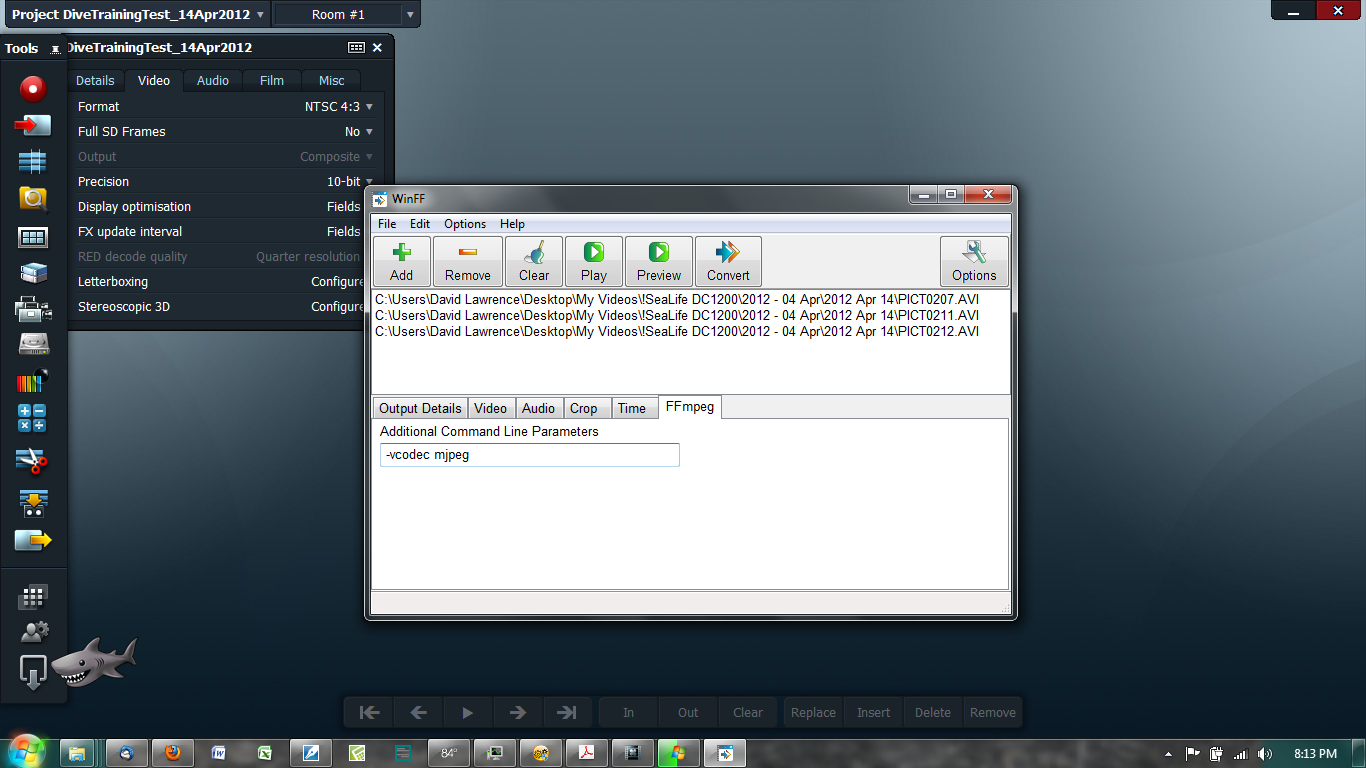 I also found the following video setting useful: a video bitrate of 25600, a frame rate of 30, and dimensions that match those of the original AVI footage. 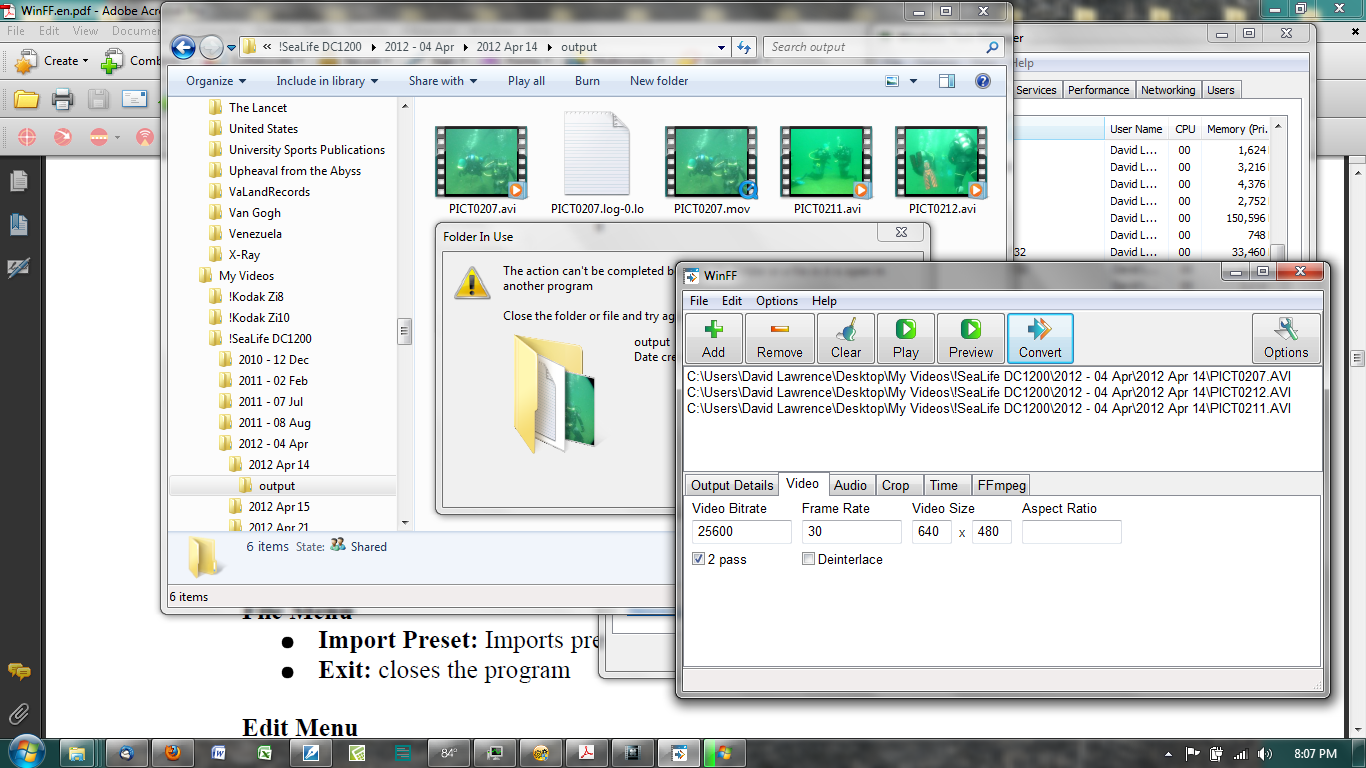 Once I converted the footage in to Quicktime format, I could import it into Lightworks and edit at will. The color correction function is pretty powerful. I was able to add video and audio transitions, and import still images. (The free version of Lightworks does not have much in the way of a titles editor, so I had to create the title and information slides in Adobe InDesign.)

The free version of Lightworks did not allow me to manually specify the dimensions of the resulting video so that it matched the dimensions of the input files. I settled for an AVI file on a 720 x 480 frame. When playing the video back in Windows Media Player, it appears to be 640 x 480, but when I uploaded it to YouTube, it appears on a widescreen frame instead, with black bars to the right and left—kind of like a rotated letterbox.

At least it works.

My final class report is posted on the Pulp Nonfiction page.

The major assignment of Dr. Tim Bajkiewicz's Multiplatform storytelling class is a neighborhood story: a journalistic work that incorporates a mix of static text and photography with video, audio, and other mixed media components. The requirements included two video pieces, two audio pieces, a Google Maps presentation and a Vuvox presentation. 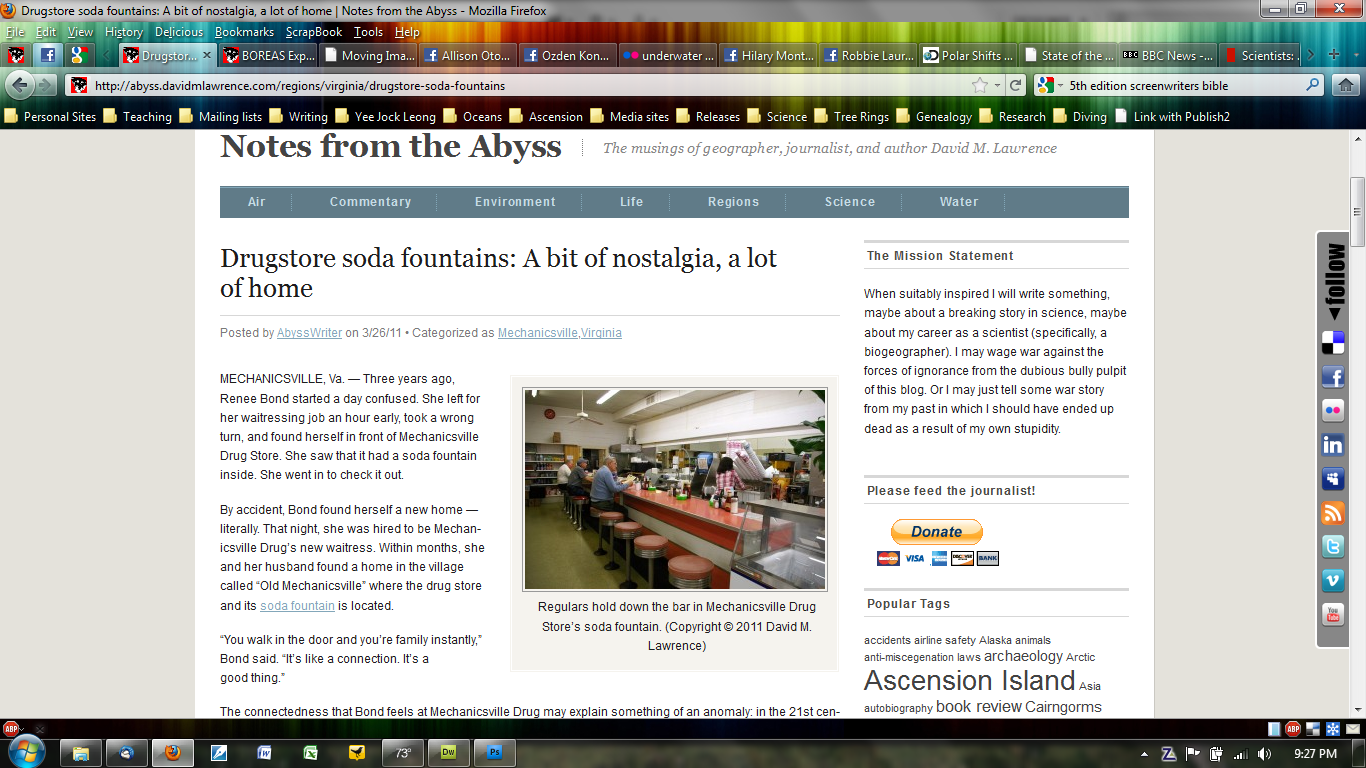 My story focused on drugstore soda fountains. While they have all but disappeared from the American landscape, Mechanicsville features two, at Mechanicsville Drug Store and Colonial Pharmacy. I wanted to find out why, so I interviewed the owners, workers, and patrons of both establishments.

I encourage you to read the full story, but for the purposes of this page, I am including links to the video portions of the piece. What follows is a natural sound package featuring an interview with Tommy Thompson, owner and chief pharmacist at Mechanicsville Drug.

Below is a natural sound package featuring an interview with Renee Bond, a waitress at Mechanicsville Drug.

More excerpts from this story are posted on the Noises & Signals page.

Slight dementia; and more than a little controversy

We were asked to cut a 10-minute Encyclopedia Britannica video on how to make a book into something between 30 and 60 seconds.

This is the original film:

Listening to the language, I realized the potential to produce something completely, uh, "off." The idea did not come out of the blue. From the time we first got a public television station in my home town of Shreveport, La., I have been a fan of Monty Python's Flying Circus. Monty Python was excellent at presenting people trying to act prim and proper in completely surreal situations, such as in the following skit:

The developers screen the architects' presentations. One calmly proposes a residential abattoir. The other proposes a design so shoddy that it literally collapses into a burning heap. Whereas the wanton slaughter proposed by first architect is calmly rejected as nothing more than not exactly what the developers wanted. Endangering the lives of the tenants through substandard construction and materials, likely given the design proposed by the other, however, is enthusiastically endorsed. In neither case do the developers respond to—nor do they seem to even notice—the horrific and homicidal nature of either design. The potential for casualties among their tenants is of no concern. The only worry is the manner of their dispatch.

I love the absurdity of the Monty Python sketch. (Frankly, it is not so absurd given actual corporate assessments of the value of life and limb.) As I listened to the original bookmaking film, I saw—and I think realized—similar comedic possibilities in the extremely dry presentation of the documentary coupled with the potential for extreme, impersonal violence wrought by technology.

My edit unfortunately provoked a rather controversial reaction among some of my classmates, who viewed it as misogynistic. I leave it to you to decide, but I suggest you consider the following questions before reaching your decision: